E-Scooters have been flooding the streets of Seoul. At the end of August, 16 companies were already operating more than 35,000 such machines in the city.

As part of the e-scooter frenzy, the Korean government recently announced new rules to come into effect on December 10. These include a much-welcomed upholding of the ban of e-scooters on sidewalks but also a loosening of regulations around helmet use, something that many Koreans are not in favor of.

The question of where e-scooters are allowed to go is most concerning to Koreans, according to Seoul-based research company Open Survey. 44 percent of respondents found it important to limit where e-scooters can be used, most likely with a continued sidewalk ban in mind. The 27 percent who said they didn’t want to share any lanes with e-scooters are not getting what they want, however, as scooters can now be driven on bike paths in addition to roads, according to the new rules.

The second most important concern connected to according to The Korea Times.

As they are being downgraded to the category of bicycles, e-scooters will not be fitted with license plates as one quarter of Koreans regarded important. Only a smaller number of respondents regarded parking or too many companies putting scooters on the roads important issues, but that attitude could have changed since the survey was conducted in March and more and more of the vehicles have been filling the streets. 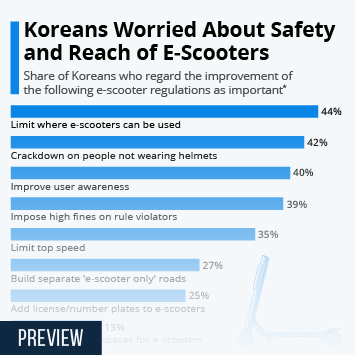 This chart shows the share of Koreans who regard the improvement of the specific e-scooter regulations as important (March 2020).

Get in touch with us quickly and easily.
We are happy to help!

Do you still have questions?

Research, storytelling, infographics & presentation design on any topic in your corporate design.